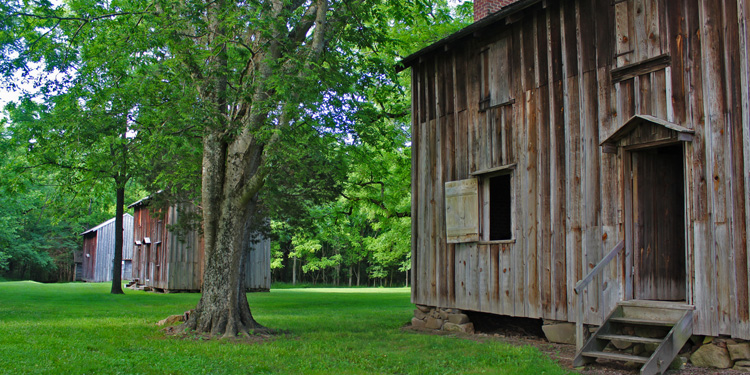 The Horton Grove slave quarters within the Stagville State Historic Site form a  small piece of one of the largest land and slave holdings in the antebellum South–30,000 acres and 900 slaves owned by the Bennehan-Cameron family.  Situated adjacent to the Horton Grove Nature Preserve, the loveliness of the site, the simplicity of the quarters siting, their tasteful design and careful restoration make them uniquely worthy of their position in the National Historic Register regardless of the despicable institution and poisonous industry  they served.  Listed in 1978, their rehabilitation represents the continued efforts to reclaim the antebellum history for African Americans and for all Americans, efforts  including the battle to open the African American Museum on the Washington Mall September 24th.

In June of 2016 the Vernacular Architecture Forum toured the former tobacco plantations,  farms and factories in rural Durham, Caswell and Orange counties in the North Carolina Piedmont.   The Forum is composed of historians, preservationists, archeologists, curators, geographers and architects fascinated by the ordinary and frequently overlooked built record of our common American history.  If in 1915 the Virginia-Carolina Fertilizer could advertise the abundance of the tobacco crop and the booming  industry, nowadays, tobacco is mostly history, as is the slave and share-cropping system that supported it making for an ideal landscape for VAF members, below touring the fallow fields and abandoned sorting and grading barn on the Pope Family Farm. 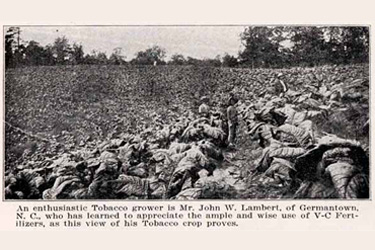 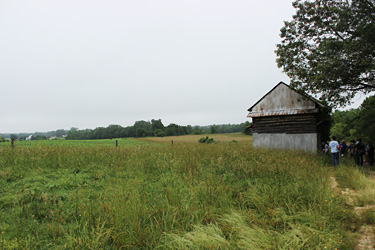 As a native Californian and VAF member, the anticipation of experiencing the rural south and the landscape of slavery, was new and intense.  Access was granted to worn and dilapidated structures like the Yancey-Womack tobacco curing and sorting barn (ca 1850) and the crumbling one-room slave shack at the Holderness House (1855), both of hewn logs chinked with mud and brick shown below. Unlike Horton Grove, but common for rural North Carolina and equally historic are ruined shacks like this one, photographed moments before a colleague plunged 6′ through the rotting floor. 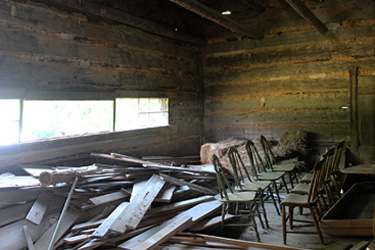 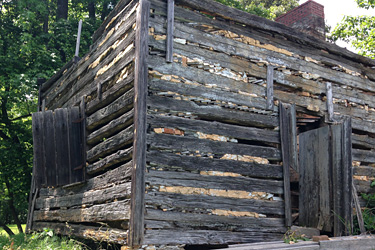 The four identical slave quarters at Horton Grove stand in a straight line, like barracks,  fronting on a small green meadow with the forest closing in behind. Thinking architecturally, the strength and logic of the siting was evident from the tour bus window as we pulled up.  Pushing ahead of the others, I snapped photos, framed views, stunned by the clean vertical planes of the structures in contrast to the shadows deep, low and black at the edge of the mown grass clearing, so lush, so intensely green.  In my camera lens, bright feelings for the beauty and love of the landscape played against the background of a historical darkness. 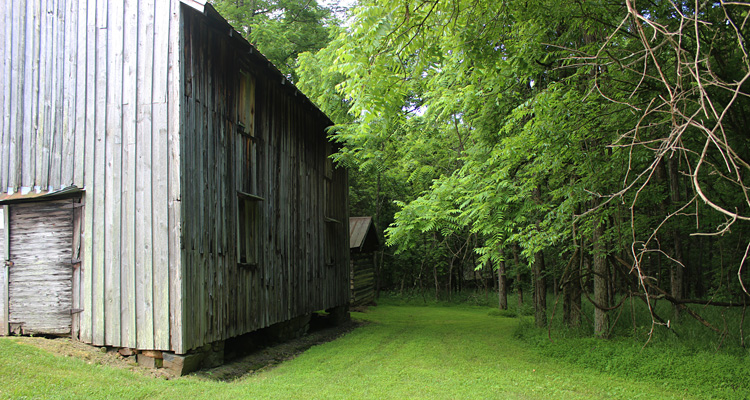 Our tour guide, George McDaniel, until recently Executive Director at the Drayton Hall Plantation, helped re-invent Horton Grove as a destination and place of memory with his genealogical research culminating with a 1977 reunion at Horton Grove of descendants of resident slaves and share-croppers.   Without knowing, I’ve praised McDaniel’s work at Drayton Hall in a post from 2012, recognizing in his stripped down approach to restoration a model for historic preservation.  McDaniel introduced the dwellings to the tour by asking how the group felt about what the state had done to maintain the property.  We looked around at the tall, brooding trees and damp mowed lawn.  “Nice?” 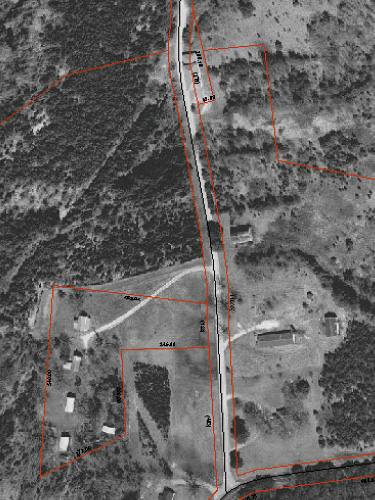 McDaniels was saddened to see that trees and grass had been allowed to flourish, and the quarters themselves prettied up when compared to his memory on first encounter of the dilapidated share-cropper houses, the dusty dirt road and tobacco fields.  “There should be dirt instead of grass here, and there it should all be open fields.  You should be able to see the relationship between the slave quarters and the overseer’s house.”

The four slave quarters form a line in the lower left quarter of this aerial photo from 1978, and the open fields are still evident.  The photo was used by Catherin Bishir as evidence in support of its nomination to the National Historic Register and, less successfully, for preserving the empty fields.

Today Horton Grove provides side by side Nature Preserve and Historic Site with clearly different agendas.  Horton Grove slave quarters also function clearly as a memorial with regular reunions of slave ancestors with stories to tell.  The rehabilitation of the quarters’ exteriors is thorough–almost like new in 1850.  The staging of the interiors is fairly minimal but suggests habitation—a broom, a straw mattress and a blanket on the floor.  Four slave family occupied each of these four room buildings–one family per room–crowded and unpleasant for us. 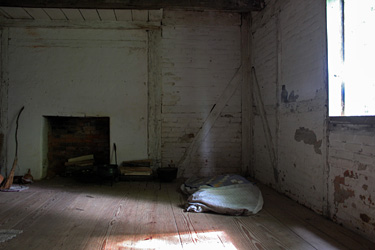 Memories are colored by what we understand and imagine as much as what we’ve seen.  How do we choose to remember this past (1) from a place of beauty and comfort connecting intellectually or (2)  as a miserable visceral experience of heat, dust and overcrowding–a physical reenactment of a particular moment in the past.  Which moment, the darkest?–the  most heroic–the most beautiful?  Judging from the recollections of the ancestors, collective memory, unlike personal, is complex, not selective, encompassing a wealth of feeling, dark and bright, both profound.   It should be noted that some slaves’ recollections have included fond memories of masters, mistresses, and home while others, less favored, feel disgust.  While descriptions of the benign re-enactments at Williamsburg seem odd pantomimes, the unconditioned heat and cold and lack of light of NYC’s Tenement museum are real sensations that truly deepens understanding.  Barring literature and cinema’s artistic license (Tarantino’s Django Unchained, for instance), a physical reenactment of the horror of slavery and racism is disrespectful, even obscene, prohibiting a realistic re-staging of the antebellum plantation.  Both Drayton Hall and Stagville  represent efforts by the South to reclaim its compromised history with a historical narrative that’s inclusive, not racist. 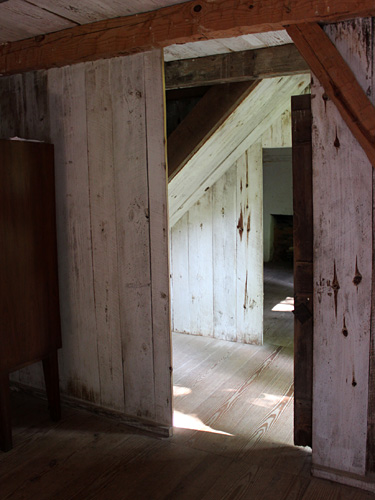 There is clearly a place for the imagination, intellect and emotion to fill the empty structures whose history is corrupt, but whose form intact. Horton Grove and  Drayton Hall’s emptiness provide a clear and simple example of the unfurnished historic structure as a vessel for memory.

Along with Catherine W. Bishir’s work in nominating Horton Grove for the National Register, McDaniel’s early genealogical efforts uniting families with historical connections to the slave community led to Stagville’s 150th anniversary celebration of emancipation.  The Slave Dwelling Project for historic preservation records a number of personal remembrances of the sleepover they staged in the quarters on the evening of the anniversary.  The event appears complex and sleepless, painful and joyous, including new ancestral connections made with families across racial lines. One comes to realize that like families, history is not the property of one class or race but shared by all of us.  The connection between people and  place remains strong and proud, regardless of a difficult history largely past, but absolutely worth remembering, not re-living.  The value of the depth of memory tied to memory’s historic locations are proven at Horton Grove despite the disgrace of its past.

Our story of Horton Grove will continue with the much esteemed slaveholder and horse fancier Paul Cameron‘s vision for  the betterment of the slave through more pleasing housing, expressing the simple truths of construction.

Check out the Slave Dwelling Project schedule for future slave quarters sleepovers.  Thanks to George MacDaniel and Catherine Bishir for their insight and involvement.

Previously serving as the Stagville Plantation House (ca 1790), the home became the  overseer’s home with the death of Paul’s uncle and the consolidation of family estates and slaves. Below the overseers 18th Century home in 1920 and as restored today.  At bottom, the overseers’ attic. 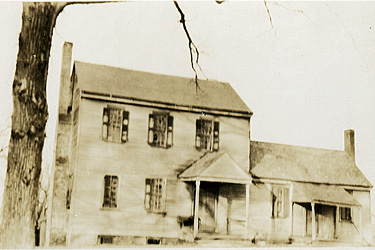 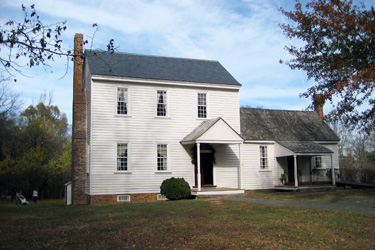 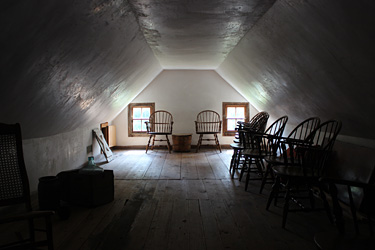 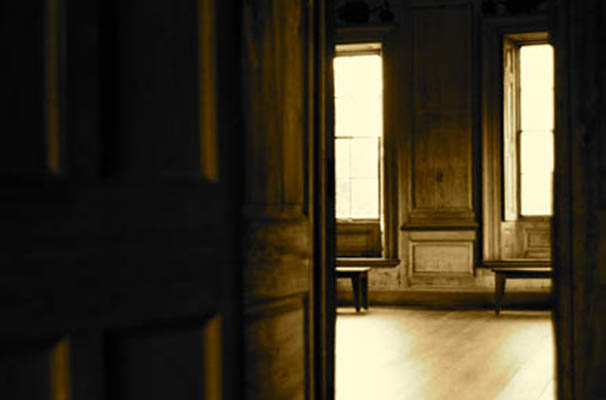 Preservation today offers provocative questions about the value of creating monuments to wealth, power and fashion. Instead alternatives present time as a continuum and not simply a period, and consider history as something that is not owned but shared by all.
At Drayton Hall Plantation outside Charleston centuries of paint and furnishings are stripped away. The empty rooms become more memorial than museum. Without the distractions of furnishings and personal memorabilia, the mind wanders through history to a time when fields of slaves and tobacco supported a family home.  The home becomes haunted by one’s own reflections on time’s passage and the ghosts of southern history.