In putting together the images for our last Ishi post, we came upon the photo reconstructions of Byron Wolfe including this fantastic image taken of a second trip with Ishi, 100 years after Ishi’s own, to the same swimming hole of the legendary campout of May 1914.

Calisphere’s Guide to Ethnographic Field Photos contains the vast photo documentation of 1914 camp photos by anthropologist Alfred Kroeber and surgeon-archer Saxton Pope as they return with Ishi to his ancestral hideout and home.  Both specimen and friend, the  relationship of Ishi, the last California aboriginal, and his academic buddies from the University of California was complicated. Likewise, the photo collection is both a cabinet of curiosities and a family scrapbook.  Poised family photos and candid swimming pics join staged photos for scientific study and the historical record.  Below incredible photos capture Ishi, and Kroeber, each observing the other, with Saxton Pope’s son on the rock behind and Ishi’s linguist T.T. Waterman far right. 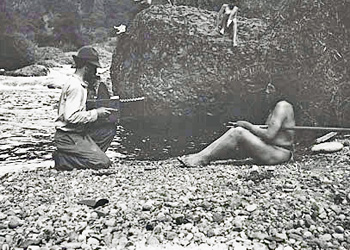 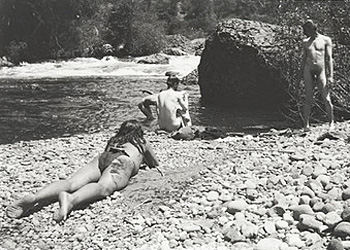 I couldn’t help scouring the river topography for similarities to Wolfe’s artistic panorama shown at top.  Wolfe positions Kroeber and Pope’s historic photos in precise locations along the stream where Ishi briefly swam.  Multiple  Ishi’s swimming and hunting populate the river in a photo-collage time-lapse.  We contacted Byron.

Hey, Byron.  I’m a fellow blogger.  Lately I’ve been thinking about Ishi and John Saxton Pope JR.  Saxon Pope Junior at age 11 who swam with Ishi and slept side by side on the camping trip you recreated.  I love this.  Could the rock on the left be the one where someone took a photo of Kroeber taking a photo of Ishi?   James

Hi James,  Thanks for your note. The panorama I made that encompasses the pictures of Ishi swimming and hunting was from the top of the large basalt bolder that Saxton Pope Jr. is sitting on in the picture you sent. When you look at the left side of my panorama, you’ll see pictures scattered along the beach. Those mark the specific locations of other pictures made of Ishi. On the bottom left edge is the top of the basalt bolder (where Saxton Pope Jr. sat) and the protrusion on the left edge of the frame is another massive bolder that is out of the frame and to the left of Jr.’s left shoulder.  Best,  Byron 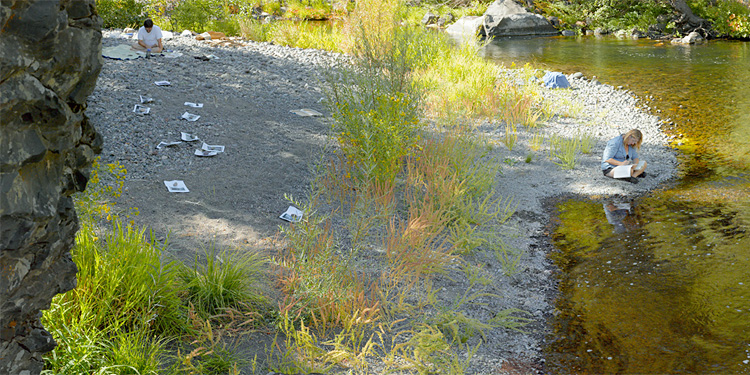 In Hi-Res close-up one sees Wolfe’s placement of copies of Kroeber and Dr. Saxton Pope’s, photos placed under rocks on the gravel beach like footstep traces of the dead photographers. The trip, the photos, the copied images, the collage step into a mirrored time familiar to those who backpack in wilderness to the same location in the same season year upon year–an already-seen world familiar to Ishi returning to his home after 4 years, and familiar to those entering the historic photos. 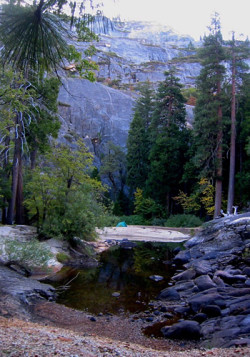 The photos provide a trail to original campsite locations in the Ishi Wilderness.  This obsession with the Ishi-camp-out has been shared by wilderness parties for years–a time-travel bonding expedition across centuries.  If you’re going, Jeff Rennicke’s description combines backpacking tips with the search for the Yahi tribe’s dark history in the rain-soaked Ishi Wilderness area, Backpacker magazine, September 1999.

In another folksy post Roger Anderson pursues Ishi  and a personal connection to living  history across decades, seeking out the daughter of Dr. Saxton Pope, Sr. in Carmel, age 92 in 1999 and again at 102 in 2009.  Between times he  bushwhacks the brush of the Ishi Wilderness, reliving the hardships of Ishi from a decidedly modern point of view.

Wilderness camping lends itself to star-gazing, to different thinking, to understanding direct experience of the natural as transcendent revelation. It offers an opportunity to enter the same unsettling space-time dimension that photography offers–into the world where Byron and Ishi travel.  Pictured left, a personal souvenir from a backpack campout in Sierra’s Emigrant Wilderness and of a decade of return trips with friends.

Thanks, Byron, friends, Theodora Kroeber’s written work on Ishi.  And thanks to the camp buddies for the centuries T.T. Waterman and, pictured below, Ishi, Alfred Kroeber, and the Saxton Popes, Jr. and Dr., left and right.  Incredible trip.