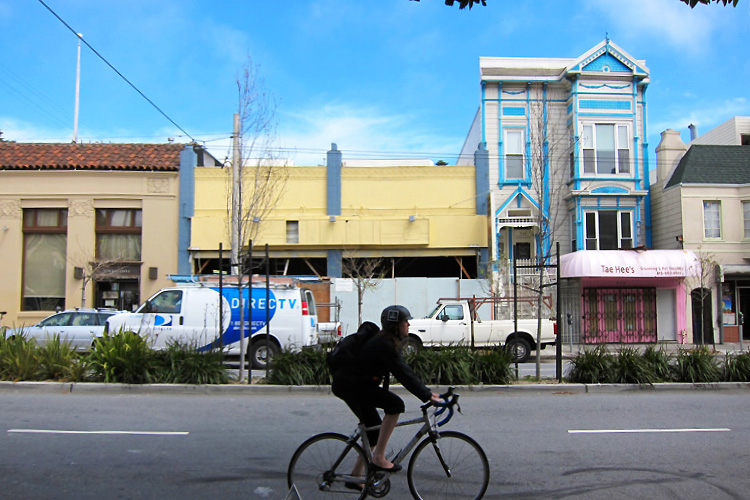 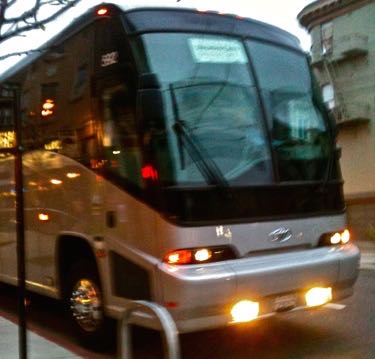 The Google, Facebook, Apple and Yahoo Commuter Buses have become a familiar sight along the Divisadero Street Corridor in San Francisco’s Western Addition.  The buses bring new income levels  to the Western Addition, increasing the commercial vitality as well as increasing pressure on existing housing, businesses and institutions to serve a newer, moneyed class.

Emblematic of the transformation on Divisadero is the replacement in October of a little-used local market (shown at top) by the second outpost of the incredibly popular  Bi-Rite Market — their motto:  “In our community, on our table”.  Currently successful in the gourmet ghetto of the Mission they are mid-block on 18th Street up from Guerrero Street along with the packed Tartine Bakery, Delfina Restaurant, Pizzeria Delfina, and Bi-rite Ice Creamery.  As shoppers arrive on foot, bike and BMW, Bi-rite Market could  accurately be described as either harbinger of local food  justice or  boutique grocery. 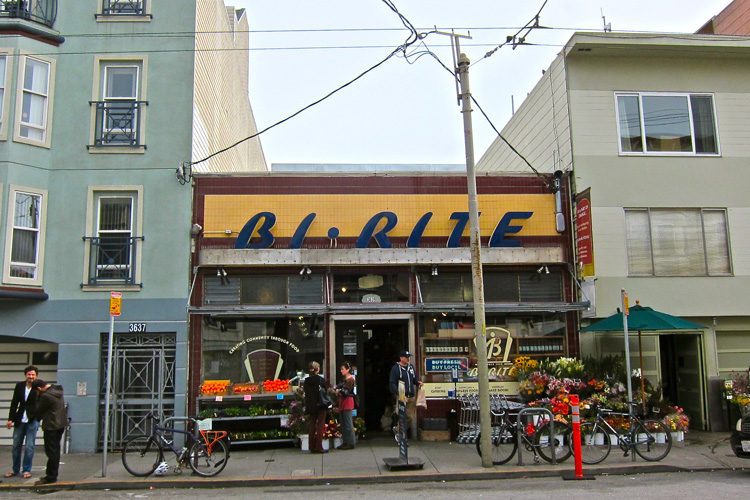 The new Bi-rite on Divisadero will locate next to their friends at Nopa (North Of the PAnhandle), another jammed, internationally recognized restaurant which with marketing brilliance branded itself and its neighborhood with the same name, re-envisioning the neighborhood in its own hipster image.  Across the street divider Bi-rite faces off with the busy if less healthy options Popeye’s Chicken and Biscuits,  Club Waziema Ethiopian Cuisine and Cocktails, Jay’s Cheesesteak, and Acme Burgerhaus.   Just 1 block up Da Pitt Bar-B-Que (formerly Brother-in-Law’s)  has served up slow cooked barbeque to the community for decades. 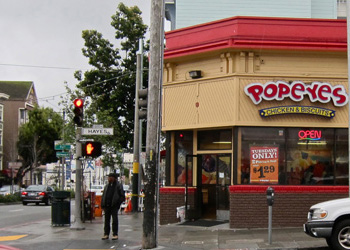 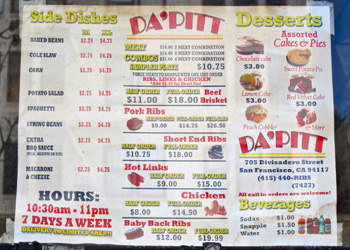 December 8, 2011, Forum with Michael Krasny, a local NPR talk show, interviewed Bi-rite founder Sam Mogannam and green grocer Simon Richard regarding  Bi-rite’s  new book “Eat Good Food“.    The discussion spun out during public comment to consider Bi-rite’s influence on neighborhood gentrification including neighborhood character, demographics and rents.  Despite protests from the Bi-rite founder, the  conflict between the food community and Western Addition’s local black community was clear: healthy, responsible food is great . . . for those who can afford it. 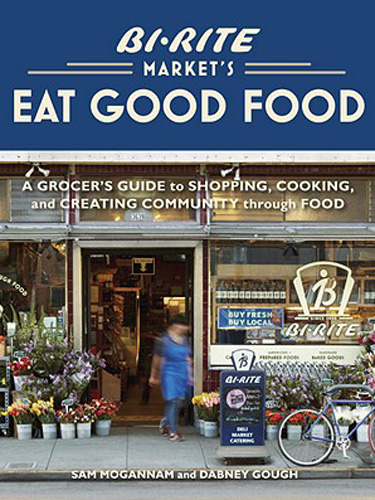 Caller Alexis formerly of San Francisco, an African-American, who has shopped at Bi-Rite and who also has deep ties to the black community in Western Addition, called in questioning Bi-rite’s claim as  a community builder:
“I keep hearing the word community as if there were no community there before.  To me the word community is a new word for privilege.  Are you going out to the community that is already there or are you trying to create a new community and ignore the one that is there.”

Bi-Rite’s Sam Mogannam’s impassioned defense:
“18th Street, that block was a pit …. Most businesses had metal bars and grates to protect against robberies that occurred weekly, and it took a business like ours to take those bars down and attract other businesses to come in and synergize and create jobs…. We’re taking over a space that sold cigarettes, Twinkies, Doritos and malt liquor.  We’re going to provide fresh foods that’s coming from farms and ranches.  We’re taking over a space that had two jobs to one with fifty.  We’re going to do what we do best.  Listen, respond and provide what the community wants.”

Questions arise:
-What’s the hidden cost of creating healthy communities?
-Who has the right to define a community and a neighborhood, who belongs, who doesn’t?
-How do we rationalize the oxymoron of a “diverse community”, when “community” implies boundaries and exclusion? 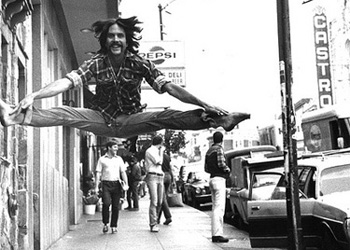 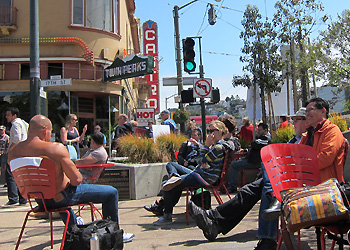 From 1975 to 1995 we watched our local  gay friendly neighborhood’s metamorphosis from  Eureka Valley to the Castro—gay Zion, tourist Mecca, and street carnival.  Changing levels of commercial vitality, rents, street life and demographics appeal to different people and different communities at different times.  Sometimes they will serve a local community, and sometimes, perhaps, a global one.  Claiming indigenous rights in an urban environment as fluid as San Francisco is hopeless, but we can direct our neighborhoods in positive ways.

Bi-rite’s was not the first book about creating healthy communities. 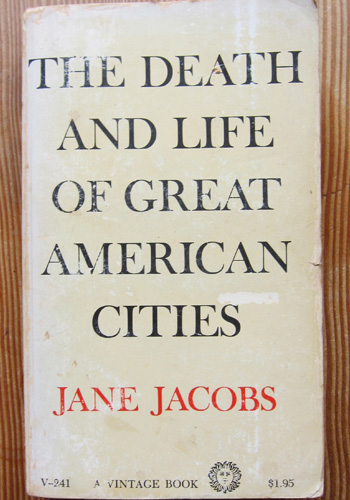 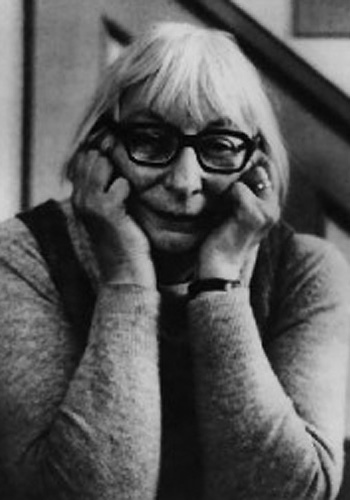 Just like vegetables, cities and neighborhoods are organic.  Proto-urbanist Jane Jacobs recognizes this in the title of her seminal book, The Death and Life of Great American Cities.  They are  healthy and sustainable when well-balanced, and they are dead and unappealing when artificially preserved or when a single interest creates limited and lop-sided growth inhibiting variety.  “Dull, inert cities … contain the seeds of their own destruction and little else. But lively, diverse, intense cities contain the seeds of their own regeneration, with energy enough to carry over for problems and needs outside themselves.”

In the afternoon, the general nastiness of Divisadero’s wind-swept microclimate and its 30 mph rush hour street traffic serves the street well, giving it a scruffy allure that attracts as it rebuffs the local street life huddling at sidewalk cafes or in empty doorways.   With the best of intentions Bi-rite joins a multi-cultural neighborhood down at the crossroads.

At Bi-rite we bought the frisée for $1.99 a head and topped it with a poached egg from the local farmer’s market and bacon from our freezer.  The frisée was very fresh, local and without bitterness.  We tossed it with a vinaigrette of bacon grease, shallots, vinegar and a little sugar. 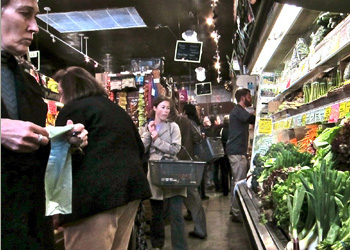 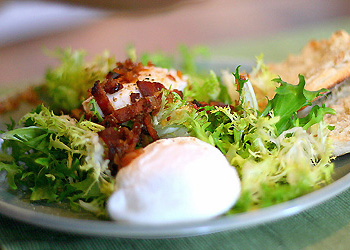 Thanks for the use of image of Castro 1978   by and © Richard Dworkin(Mr. Flikkr) and of Frisée Salad  and recipe by and © smittenkitchen.