On Thursday evenings and Sundays mornings, the largely white neighborhoods of the Western Addition are transfigured by  voices singing the gospel and shouting Amen from within the local African Americans churches of what were predominantly black neighborhoods.   Once occupying the entire Western Addition as “the Harlem of the West“, the now scattered black community reassembles in the church choirs and congregations with former neighbors driving in from more affordable neighborhoods across the city, and across the bay for worship and community. 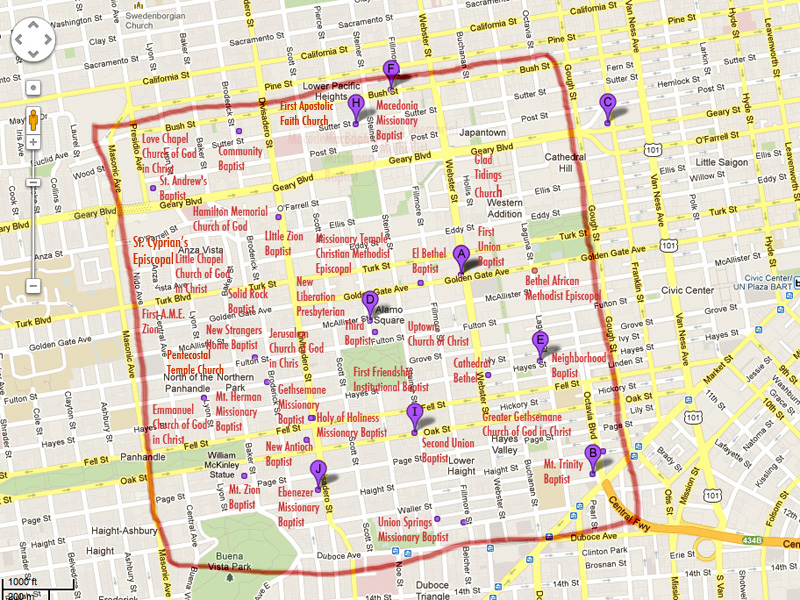 Connecting the dots on a googlemap of “baptist churches”, one can chart the size of the mighty community that filled San Francisco’s Western Addition including the neighborhoods of the Fillmore, both Upper and Lower, Haight Ashbury and the Lower Haight, Hayes Valley, Alamo Square, NoPa and Divisadero Street, the Lower Pacific Heights, Japantown, and Cathedral Hill.  Along with the Baptists we’ve added to the map the names of black A.M.E.s (African Methodist Episcopal), C.O.G.I.C.s (Church of God in Christ)  and Pentecostals. 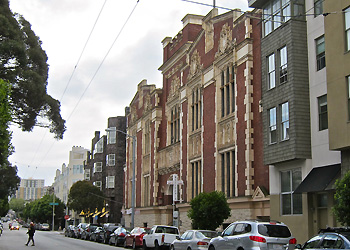 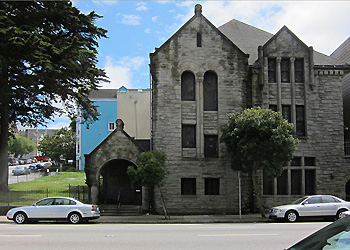 The churches range across the heart of the city from the imposing Macedonia Missionary Baptist in Lower Pacific Heights  to the gothic Mount Zion Baptist across from Golden Gate Park in the Haight Ashbury, pictured above, and from the rosy Love Chapel Church of God bordering Presidio Heights to the modest Mount Trinity Baptist along the new Octavia Blvd. near Market Street, both shown below. 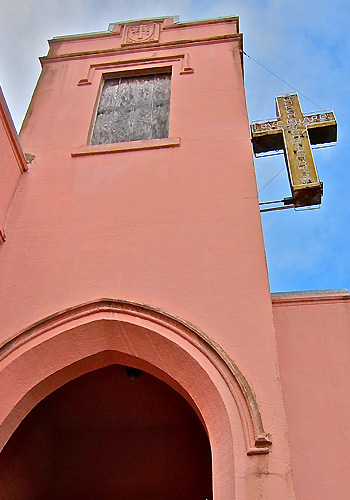 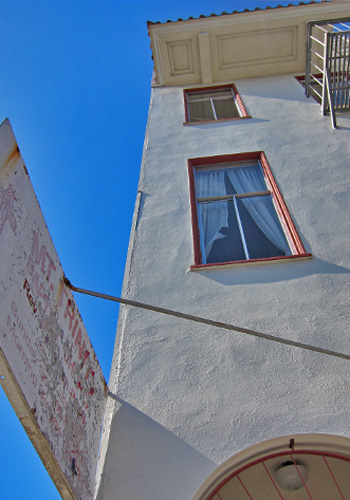 Over a 69 year history these church communities have fought a continuing battle for permanence and relevance.

Typical of many, the founder’s plaque at the Macedonia Missionary Baptist dates the Sanctuary’s beginnings to 1943, during the heyday of wartime ship building and at the height of black migration from the deep south.  The plaque goes on to proudly honor “Mortgage burned, July 6, 1958,” while one block down, San Francisco Urban Renewal begins its buy-out and wholesale demolition of the district, replacing Geary Street with Geary Boulevard, effectively cleaving Pacific Heights and the Macedonia Missionary from the heavily  concentrated black neighborhoods south of Geary with a six  lane expressway beginning and ending precisely at the Western Addition borders, serving all but the locals. 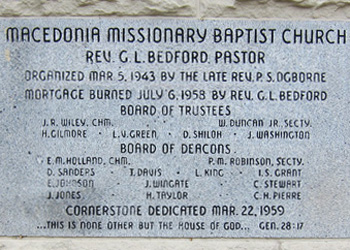 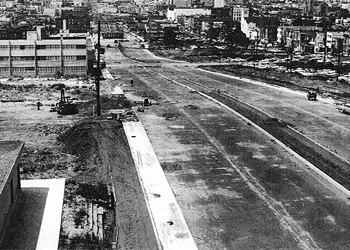 Beginning in wartime 1943 like the Macedonia Missionary, the more nomadic congregation of the Greater Gethsemane C.O.G.I.C.  suffers both forced and voluntary relocations before settling down.   Starting on Eddy Street, ground zero for Urban Renewal Project Area A-1, the congregation relocates to Buchanan Street, soon to become Project Area A-2, where the church is claimed by San Francisco Redevelopment and demolished.   Re-established in a former theater in the Lower Haight, they sell to the developer of The Theater Lofts Condominiums.  In 1999 Lord Pastor Dad Grant leads  his congregation 5 blocks home to the stately 240 Page Street, the former St. Paul’s German Methodist built in 1909, shown below.

Nearby up Page Street, the neon cross at the 2nd Union Baptist still glows nightly after 50 years. 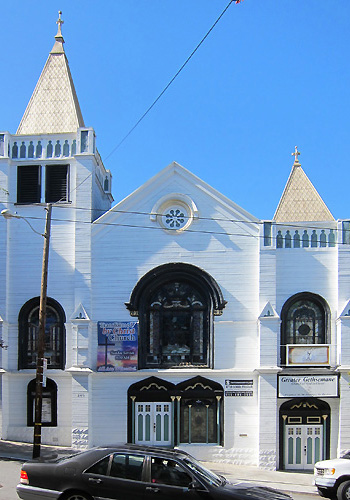 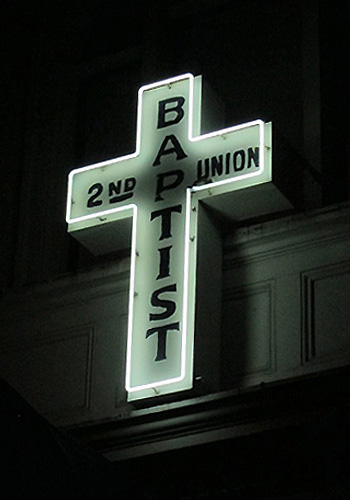 Among the  more prominent congregations, the Third Baptist near Alamo Square claims to be the oldest, founded in 1852.  Both believers and activists , the church  maintains long-standing connections with the N.A.A.C.P.   Below W.E.B. Du Bois  speaks in the sanctuary to the NAACP in 1958.   It has been pastored by the outspoken  Dr. Amos C. Brown since 1976, current President of the local branch. 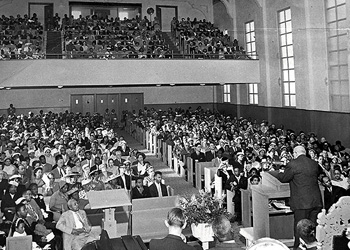 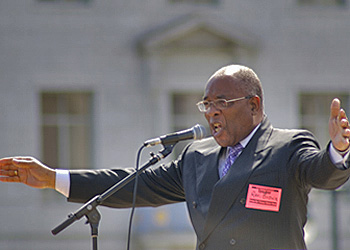 Out at the fringes of the district, two different strategies address the issue of dwindling attendance.

The steeple of the First A.M.E. Zion, the oldest African Methodist Episcopal, congregation west of the Mississippi (1852), stands opposite the private San Francisco Day School at Golden Gate and Masonic, below, one representing the older and one the newer demographic.   In 2009, the 26 year old, Rev. Malcolm J. Byrd was called from Brooklyn to re-vitalize the aging congregation.  Check out the video of his arrival,  “A New Beginning”,  for an inside view. 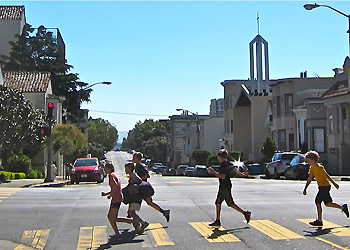 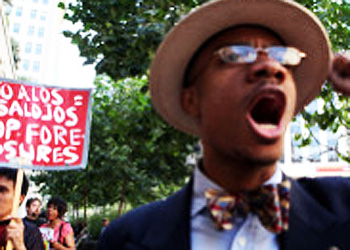 At Turk and Lyon, the congregation of the multi-colored St. Cyprian’s Episcopal, below, adapts to survive, transforming from a 34 member declining black congregation to an integrated  neighborhood  church, reflecting the evolving neighborhood  with significant community outreach programs and its own voice in issues affecting new community interests. 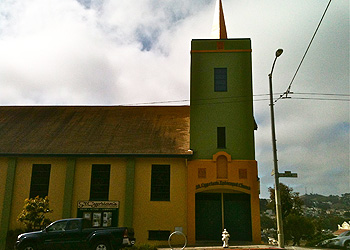 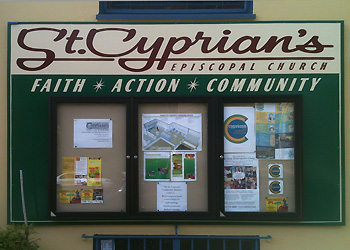 Like the recently publicized foreclosures in Bayview, the steady loss of the churches of the Western Addition through foreclosure, eviction  and attrition echoes  the economic expulsion and flight of San Francisco’s black population, representing 17% in the 60’s before Urban Renewal and the loss of blue collar work, and now representing 6%.  The churches stand as testament of their binding strength as a spiritual homeland for a community dispossessed of its physical, geographical neighborhood. 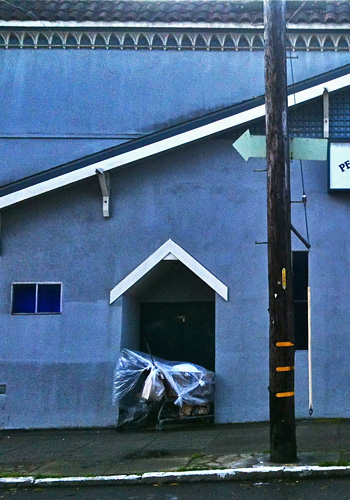 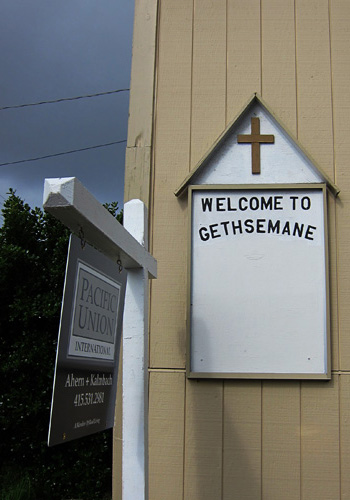 Above NoPa’s Pentecostal Temple and nearby the recently foreclosed Gethsemane Missionary Baptist.

The next few blog posts present an incomplete catalog of the endangered Western Addition churches, representing both a spirited culture and free-spirited architectural approach.  Our interests are:

1.  to chronicle the remnants of a disappeared community and an endangered multi-culturalism.

2.  to recognize in the simple, evocative  forms and iconography of the smaller churches an historical architectural resource that provides a powerful counterpoint to the bric-a-brac laden Victorians in the neighborhoods they renovate.

Below, sidewalk topiary at the Love Chapel Church of God in Christ glows in the light of a setting sun.

Thanks to the recently defunct San Francisco Urban Redevelopment Agency for Geary Street Demolition photo and the San Francisco African American Historical and Cultural Society for DuBois at 3rd Baptist and Joe Philipson for Rev. Amos Brown.  And thanks to Mrs. Dominique Jackson Byrd and the First A.M.E. Zion Church for the image of Rev. Malcolm J. Byrd and the video “A New Beginning.”