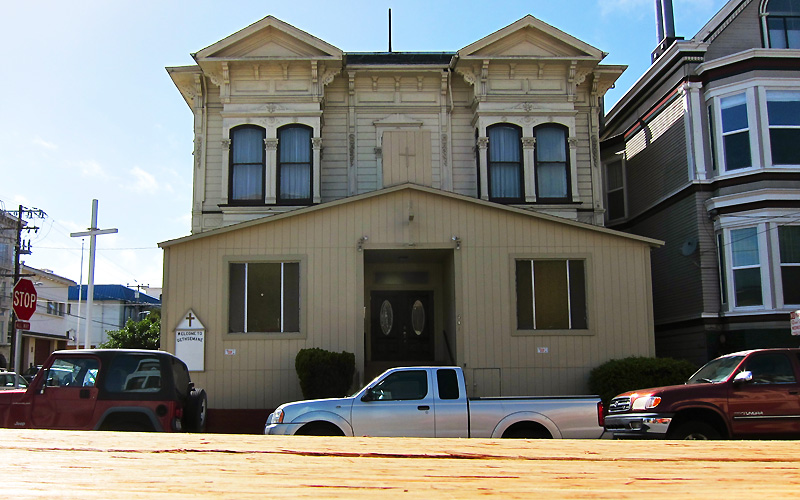 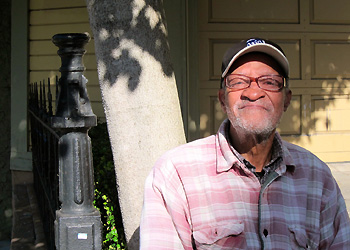 “The last days are here.”  80-something,  Ray takes his morning constitutional down to the corner store, at Broderick and Fulton around 8 am, hangs out to catch his breath, smoke a cigarette, socialize and sometimes prophesize.  We talk about the recent foreclosure and sale of the Gethsemane Missionary Baptist a block away.  “I’d been sayin’ it all along, it’s the last days, I do believe that.  The last days are here!”

The Gethsemane Missionary Baptist at Grove and Broderick is the latest of Western Addition’s church closures.  Neighbor Bill reports the church had been failing for  a while and was not shocked to hear the loan had been foreclosed and the property sold.  The realtor for sale reports the interior was in shambles.

I bump into Dharma, drinking lattes, a block east at Mojo.  He recalls, “I think maybe it was 2004.  I ‘member walkin’ by and those walls were like pumpin’.”  Here he makes a squeeze-box oompah gesture.  “Yeah, it was this cool, loud gospel music.  We stuck our heads in, but it didn’t exactly feel right. So ….” 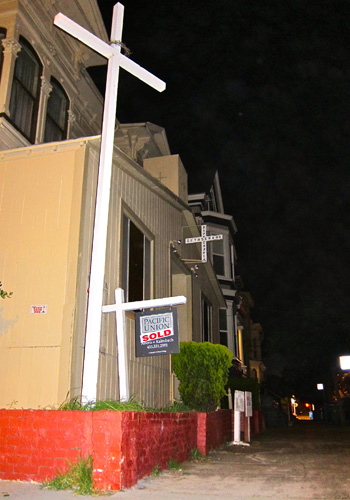 Friday the 13th, April 2012, was the day the music died at  Gethsemane Missionary Baptist–the day the foreclosed property was listed for sale.

As described on the realtor’s website redfin.com: “601 Broderick is a charming old church … in the heart of NOPA.  Not for the faint of heart or faithless, this property needs a revival. … make them believers. Heaven only knows what the possibilities could be!”  Receiving multiple offers on first showing, the sale closed before the For Sale sign was hammered in the ground.  Highland Ferndale Partners,  a luxury home developer purchased the church for restoration and resale.  David Papale, partner and realtor,  prefers not to disclose the sale price, but  redfin.com notes the price clearly at $1,401,000, 40% over asking, a sizeable investment in the future of the community. One might speculate, since this is real estate, that the sale price is more than adequate to cover the losses the bank faced in foreclosure on their faulty loan, a profit unrealized by the church.   Mr. Papale claims, while the possibilities for the property include six  units, it will be restored as a single family  home and to its original Victorian appearance without “that horrible addition.”

Emphatically squat and unadorned, aluminum windowed and with in-your-face exterior spots, the addition could easily be seen as the Anti-Victorian to an ardent preservationist.  The photo from the Planning Department’s  1976 Architectural Field Form  shows the original entry porch, intact up to 1976. 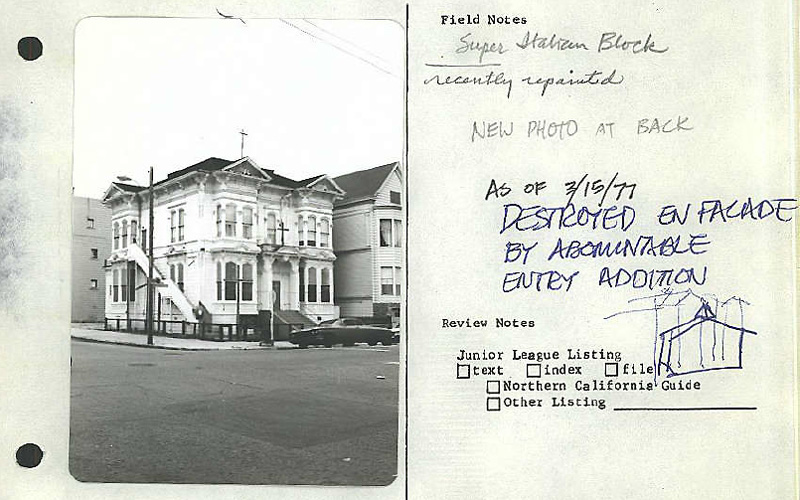 “DESTROYED EN FACADE BY ABOMINABLE ENTRY ADDITION.”  Overcome with emotion the Planning Department’s  Field Notes for 601 Broderick rave with a zealot’s outrage about the 1977 entry addition for the Gethsemane Missionary Baptist.  The Field Notes represent the personal indignation and righteousness that mark the beginnings of historical preservation enforcement in San Francisco’s Planning Department. 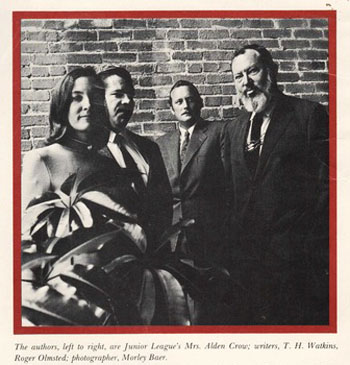 In 1962 the women’s Junior League of San Francisco, the self-proclaimed incubator for “many of San Francisco’s most successful fundraisers and philanthropists (Opera, Ballet, Symphony, etc.),” initiated a drive-by survey of important historical structures and recorded them in the book Here Today (c 1968).    Responding to Western Addition’s decay, Urban Renewal‘s demolition (including 2,500 Victorians) and the post-war craze for asbestos shingle and stucco facade upgrades, the survey focused heavily on homes with Victorian ornamentation.  With the advent of Redevelopment Phase 2, their record serves in memoriam the further Victorian disappearances and relocations of the coming decades.  Pictured here are Here Today’s authors: Junior League’s Mrs. Alden Crow, the writers Watkins and Olmsted, and the masterful California landscape and architectural photographer Morley Baer.

The volunteer efforts of the Junior League are notable and praiseworthy.  Based on their  groundbreaking work, the Planning Department extended the list with the 1976 Architectural Survey of rated buildings–10,000 buildings in 60 unpublished volumes, accessible in the department’s database but less available to the general public.  For decades this  historical listing became the Planning Department’s chief basis for more severe scrutiny of facade alterations comparable to airport security’s no-fly list.   With this years online publishing of the survey field forms, the information for all listed properties is at last accessible and its inherent subjectivity evident.

It must be admitted, looking back in time, the historical porch is elegant and charming in the old black-and-white Field Form photograph.  And with the loss of the congregation the carefree chutzpah of the 1977 entry addition becomes less supportable to the values and beliefs of a new community.  Likewise, its inevitable demolition and architectural loss become trivial compared to the loss of   affordable options for a broader community. 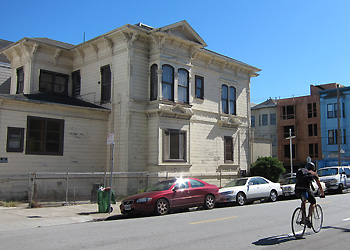 The goal of historic preservation remains laudable, but one some can ill afford.  In the 40’s, 50’s and 60’s when redlining made home loans unavailable to residents in the Western Addition, maintenance, repair and improvement were not even an option.  Today, chipping paint, warped flooring, aluminum windows and asbestos shingles can look as attractively affordable to a budget minded renter or a TIC purchaser, as they can to well-funded developers like the Highland Ferndale Partners.

At Gethsemane, one should expect that under the watchful eye and wagging finger of the City’s Historical Review Process a new historical look will be recreated including entry and garage for the freshly painted luxury home at 601 Broderick.  And one can reckon that the so-called horrible abomination of an entry that served a rocking congregation for 36 years will be bull-dozed and our post will serve in remembrance.