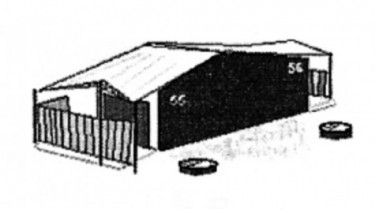 Schindler enlists his Illinois in-laws’ financial support with this enticing description of their daughter’s future Hollywood home: , “The rooms are large studiorooms–with concrete walls on three sides, the front open(glass) to the outdoors–a real California scheme.” (letter to Mr. and Mrs. Edmund Gibling). He continues: “Both ‘court’ and ‘terrace’ are to be used for social events–especially the ‘court’ may be covered by velumn and serve as a real room.” 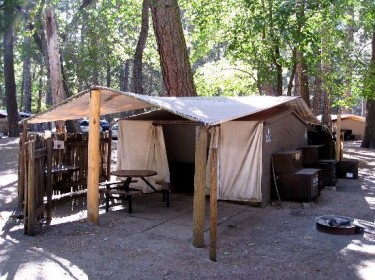 Rating 3 1/2 stars on Yelp, Chad A describes the Housekeeping Camp experience like “The name sounds totally ghetto, but believe me this place is awesome. You have a couple of concrete walls that are of course covered, a couple of beds, drapes to close the “door”, a camp fire pit, covered “patio” area, and the best part electrical outlets to plug things in. Now I know some of you will say that is not camping to have electrical outlets, but I think it makes for a most wonderful addition… especially if you have like an iPod Dock because then you can cue up music for hours.  If you want to make the small trek they also have a small liquor store with all the basics for a good time in case you forgot something. We kept hitting it up for more beer for our drinking games. They also have laundry facilities and some transportation to some of the more famous places.”  Beyond the fireplace neither place has heat so bring extra blankets. 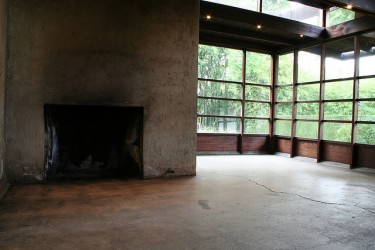 The home was completed for move-in by May of the next year.  In terms of partying and bohemian entertainment it was certainly competitive with Housekeeping Camp.   Schindler employee and architect Harwell Harris writes: The Schindler’s open house on Sunday evenings attracted the “arty” intellectuals of post-World-War I. … Hollywood drew them like a magnet. … Poets, playwrights, dancers, photographers and musicians … Socialists, reformers and intellectuals of all varieties were there. The talk was not chit-chat but about revolutionary ideas in all fields. The New, the Advanced. There were no fights because the participants, too, were advanced and so in fundamental agreement with one another. Most were locals; some were habitues; others were ones who came and went. Everyone felt free to bring a friend if he were interesting; it was a way to entertain.” (as quoted in Esther McCoy’s: Vienna to Los Angeles: Two Journeys). 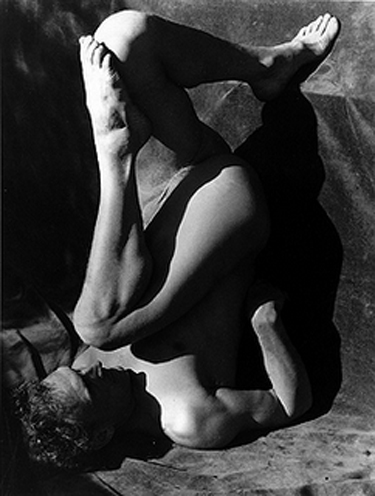 Schindler would live and work here for the rest of his life.  As others came and went, he would  share spaces with architect Richard Neutra and wife Dione, Galka Scheyer (Pasadena Art Museum donor) and dancer John Bovingdon (here in 1930 photo by Imogen Cunningham), musician John Cage, and Pauline Schindler returned from a gypsy lifestyle, but now separated from her husband. After Schindler’s death, Aldous Huxley moved in, the year of his first LSD trip.

In recent history Yosemite’s Housekeeping Campground provided both X-shaped four-plexes as well as this H-shaped duplex under a tent roof still extant at Housekeeping Camp.  Schindler slept here?  You can too!

Thanks to Aidan Murphy for his photos of the rough and sooty  concrete walls of the King’s Road home before restoration and current re-invention as LA’s MAK Center for Art and Architecture.   For more photos of the spartan accommodations at the Schindler House check out Aidan’s flickr site.