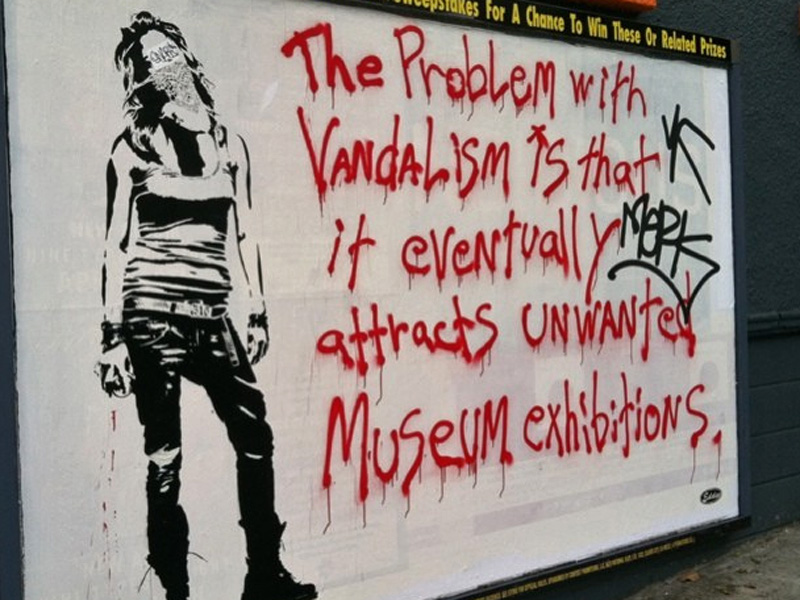 At the Berkeley Art Museum the Barry McGee exhibit lionizes his undeniable and unbridled talents as graffiti and street artist.  (See our last post.)  The show questions  graffiti’s place as outsider art inside a museum setting. Selling out to a gallery is hardly a crime if you’re an inner-city youth with few opportunities (see 1983’s video classic Style Wars).  But if you fancy yourself a professional outsider like Barry McGee (BFA San Francisco Art Institute 1991) your professional work is privileged and surcharged with artistic irony.

Along with the graffiti art superstars and inner-city taggers, let us also salute those unsung heroes who have spent hours on Sunday mornings,  face down, scraping and scrubbing away one tagger’s night of fun from our grubby sidewalks, or who with paint brush raised repeatedly obliterate a black marker tag on their trash door with a paint that doesn’t quite match up, prepping the blank canvas for the night’s inevitable re-tagging.   Together, taggers and tag-removers form a perverse self-sustaining eco-system that provides us with an uncertain urban backdrop challenging property and community values with thoughtless and costly acts of big kid fun.

Four blocks down Divisadero Street, frustrated Mojo Bicycle Cafe owner and parklet maintenance man, Remy, expresses the frustrations of many:   “If I get a hold of ’em, I’m gonna u-lock their head to a parking meter!”

Last summer’s trip to Berlin alerted us to the liveliness of graffiti when experienced  without the personal burden of property ownership.     Tags, posters and street art provide a sidewalk wainscot as high as arms’ reach that’s by turns stunning, destructive, decorative,  enlightening , accusing and amusing. 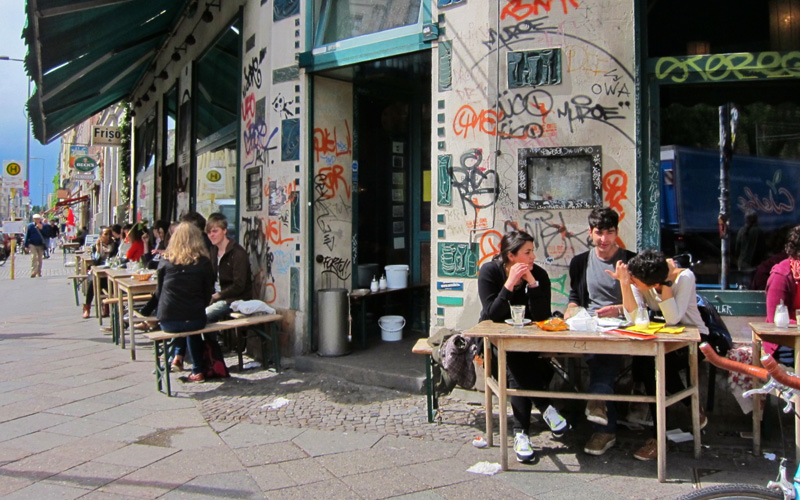 At a corner cafe in the Kreuzberg tagging has reached such a frenzied level that cleanup has been abandoned, and public outrage transformed to a whatever, you-win acceptance.  The consistent density of graffiti forms a lively decorative pattern.

Below, street art brightens the grim party scene warehouses under the tracks in Berlin’s Friedrichshain. 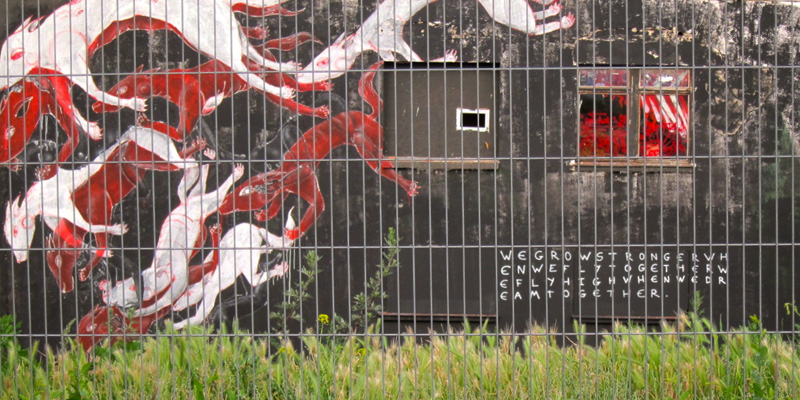 In Berlin graffiti and street art is impossible to ignore and offers us an alternative outlook to the outlawed tags and the sanctioned street art of San Francisco.

A shout in the darkness “CAPITALISM DESTROYS. CAPITALISM KILLS!”–this provocation effectively protects free squat housing in the otherwise gentrified Prenzlauerberg district labeled “the Noe Valley of Berlin” by San Francisco ex-pats.  In Berlin the challenges to conventional thinking and complacency are unavoidable.   The street walls and building faces that form the background of our daily life are not silent. 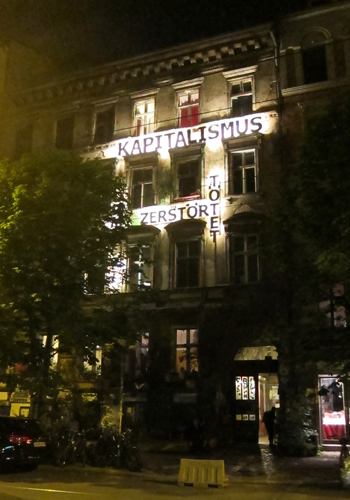 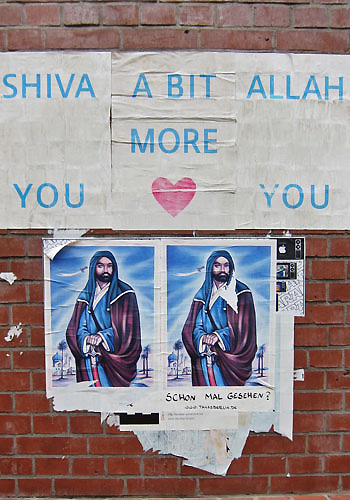 Faced with Berlin’s blight,  San Francisco Director Mohammed Nuru and his Department of Public Works would be in an apoplexy of enforcement, posting violation notices atop graffiti, impartially criminalizing both vandal and vandalized.  Check out their you tube video for your favorite tags and corresponding outrage.

Recalling the Wild West and Depression Dustbowl, DPW slaps public notices across the vast city landscape like WANTED and REWARD posters, authorizing property owners as vigilantes charged with protecting their own property.    This scenario paints taggers as modern day Billy the Kid’s and Pretty Boy Floyd’s and corporations as greedy robber barons seeking total mind control through monopoly of our visual world.    McGee’s rationalization of street crime as the art of an unfair world is not totally crazy if the caliber is high and the populace forgiving.

DPW’s war on graffiti has created a  limited success.  Compared to Berlin, fines to tagged property owners have proved successful in controlling graffiti pushing tagging crews to less guarded and unfined locations.  Notably, back alleys, Muni and trucks, sidewalks, shops with  recently terminated leases, and even trees are bombed.  Below the fantastic 2006 ORFN, has survived a remarkable 6 years as a moving target in the outer NOPA. 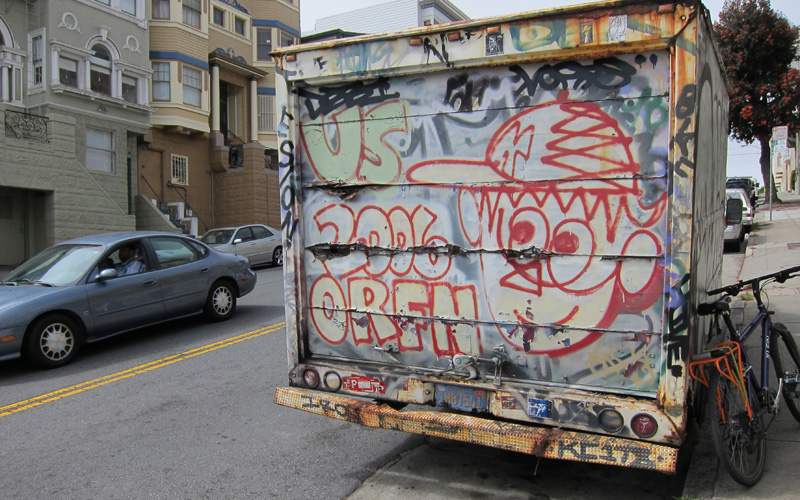 Pay attention,  street art admired one day will be gone the next.  This moving street art memorial on the wall of the vacant UC Extension on Haight at Laguna encouraged the community to tag on the serious losses the Lower Haight community has faced. 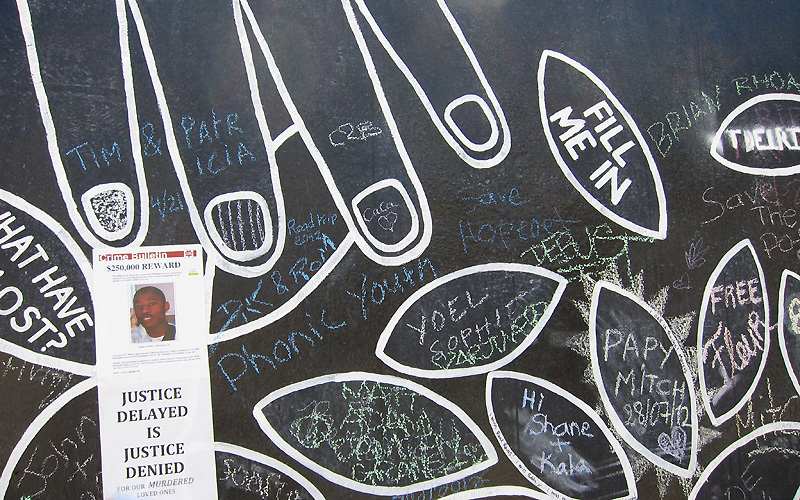 Lately, the memorial has been obliterated by a by a less nobly motivated artist with a mural as relevant to the community as the sadly permanent 12-foot tall pink bunny around the corner at Laguna and Haight. 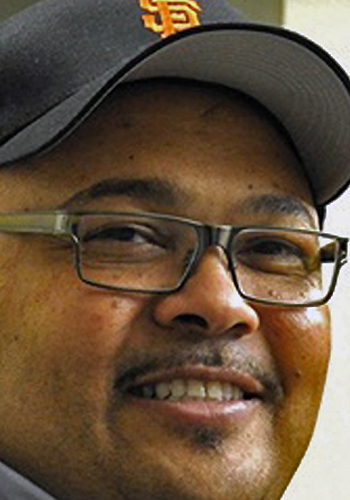 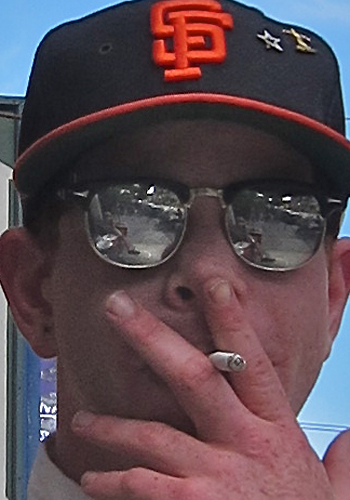 “But is it Art?”  According to Nuru’s DPW if its commissioned it is not graffiti.  Into this provocative loophole leap semi-professional graffiti artists whose street art includes contact information such as E Clair Acuda Bandersnatch with her ubiquitous mix of adorable and sinister including the Save-More Market at Eddy and Divisidero below.

As described by Cameron, tagging crews form a secret, insider club for social outsiders, where Kings mentor crew initiates in style, materials and rules of the game.  Each crew parties and then hits the streets to maximize exposure and longevity in a shifting landscape of  impermanence, paint-outs and going overs.  Gang-tags, independent tags and the general public are incidental and outside the game.  With the various crews numbering between 12 to 100 members, they operate along the edge of criminal behavior,  sometimes falling into more  serious socially destructive behavior and sometimes stepping back as elders of a new generation.  Check out King Barry McGee‘s own description of the sport.

Whose neighborhood is it?  On Birch Street between Laguna and Gough, an embattled block has taken a creative approach to protecting 150’ of concrete block and fencing, riffing tags into an organic pattern that spins off the obliterated typography into one of the longest pieces of street art in the city. 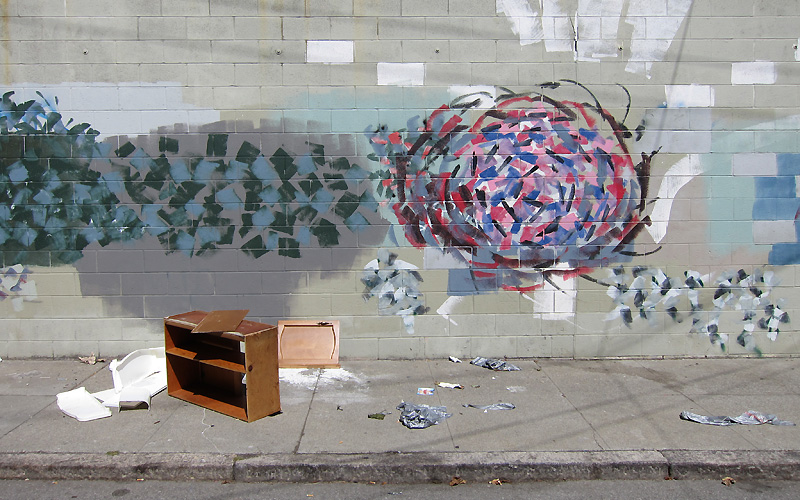 Below images of the collective consciousness posted on Linden Alley and concealed behind the closed restroom doors of Taqueria Cancun. 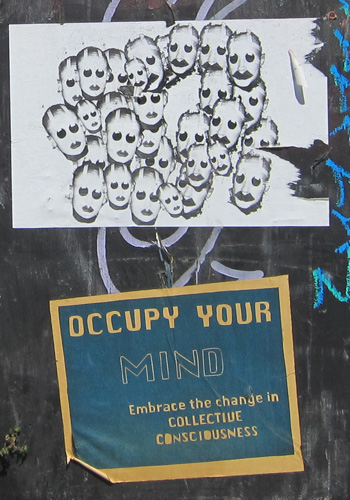 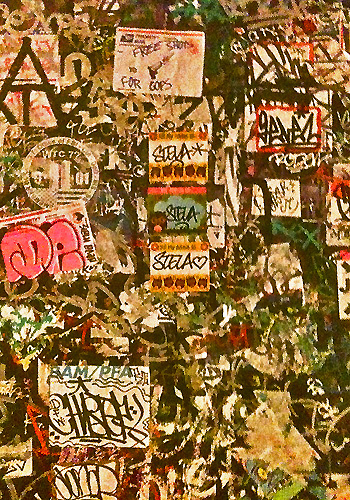 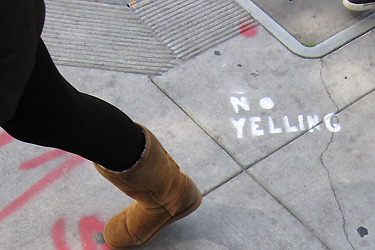 Outside The Page corner bar where the smokers hang, sidewalk graffiti offers these simple words of  peace to the neighborhood:

Graffiti intersects the public realm where it forms the background for our daily  behavior, competing in volume with corporate advertising for visual and mental attention.  It effectively discourages gentrification with its uncertainty and insult.  As it crosses the line from outsider to art and commercial success, its role is reversed, and the artist is first in line as the unwilling vanguard of the neighborhood’s change.

Thanks to Carol Ciappa for spotting “The Problem with Vandalism” and Vinyl for bringing it to our attention, and thanks to Woody Guthrie and Barry McGee for insight into the criminal mind. 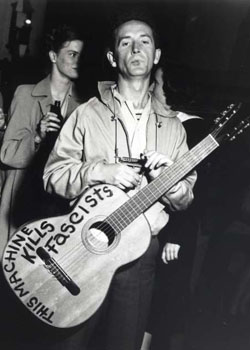 Seen on the side of a Wells Fargo ATM at Oak and Broderick 94117: 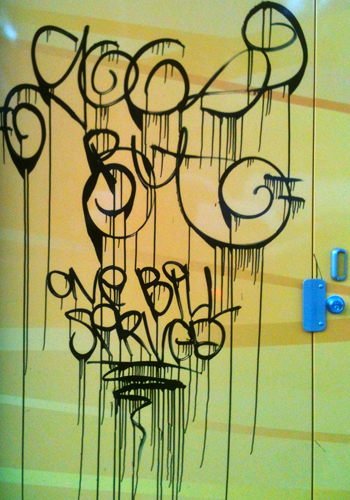